Children who permanently reside at a street address within the enrolment zone defined below are entitled to enrol at Beckenham Te Kura o Pūroto. If your children live in the school’s enrolment zone and you would like them to be enrolled, please download the enrolment form, complete it and return it to the school office. 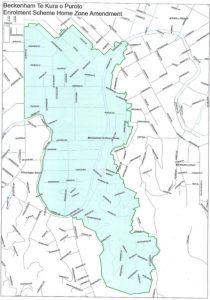 Starting from the intersection of Sandwich Road and Waimea Terrace,

Addresses on both sides of boundary roads are considered in-zone unless specified otherwise.

For families of currently enrolled students whose addresses become “out of zone” due to this amendment to the enrolment scheme home zone: they shall be deemed to be “in-zone”, but only for as long as they contain children who, at the time of enrolment, are the siblings of current students.

The School office holds a list of such families if you are not sure of your situation.

NB This is a very tightly defined concession. It would not apply to:

Section 11E of the Education Act 1989 states that “a state school’s home zone must be defined by geographic boundaries, and must be described in such a way that any given address is either within or outside the home zone.” The list above is defining a location as “in-zone” unless dictated otherwise by the exceptions outlined in A and B above.

Out of Zone Enrolments

The number of places will be determined by the Board of Trustees on the basis of current and projected class numbers and school roll. To manage our roll, we are currently not taking any out of zone students unless they will be siblings of a current student in the year that they start school.

If you would like to apply for a place through our ballot system for a sibling of a student who is currently attending, please download the ballot application form (which includes on the second page the application cut-off dates), complete it and return it to the school office.